VERO BEACH, Fla., May 26, 2021 – Piper Aircraft announced today that it is sponsoring a team of dedicated aviators for the 2021 Air Race Classic. The Piper sponsored team, named “Tres Aviadoras” consists of three passionate aviators who seek to inspire and champion women in aviation.

This year’s race will be an Air Derby format, where participants are able to choose their own 5-leg, one-day route. Team members, Elise Wheelock, Captain Olga Custodio and Captain Tammie Jo Shults, will launch their route from Boerne, TX the second week of June. The team will fly a normally aspirated, piston powered, Piper Pilot 100i – the newest addition to the Piper trainer product line up.

The oldest of its kind, the Air Race Classic has long been the lead event in women’s air racing. With pilots ranging in age from 17 to 90 years old, the diverse group of participants represent a wide range of backgrounds, career groups, and flight experience. Each of these participants play a critical function as role models for future aviators.

“Role models, like Elise, Tammie Jo and Olga have each led the charge with their own list of “firsts” in our industry”, said Jackie Carlon, Senior Director of Marketing for Piper Aircraft. “This team truly embraces the legacy that past female aviators have created and they themselves have helped pave the way for a new generation of aviators. Young females need to continue to see more examples of successful women throughout the aviation industry – flying aircraft, working on airplanes as aviation maintenance technicians, and leading global airline operations to inspire and motivate them – it is up to us to continue to mentor the next generation of aviators.”

“I am honored to have the opportunity to participate in this year’s Air Race. I am excited to fly alongside these aviation legends, who are also my role models”, said Elise Wheelock, Piper Aircraft Fleet Sales Representative. “Olga and Tammie Jo have inspired me personally and have helped female pilots everywhere by paving the way with their drive and enthusiasm for aviation. These women are a huge part of the reason I am a pilot today.” 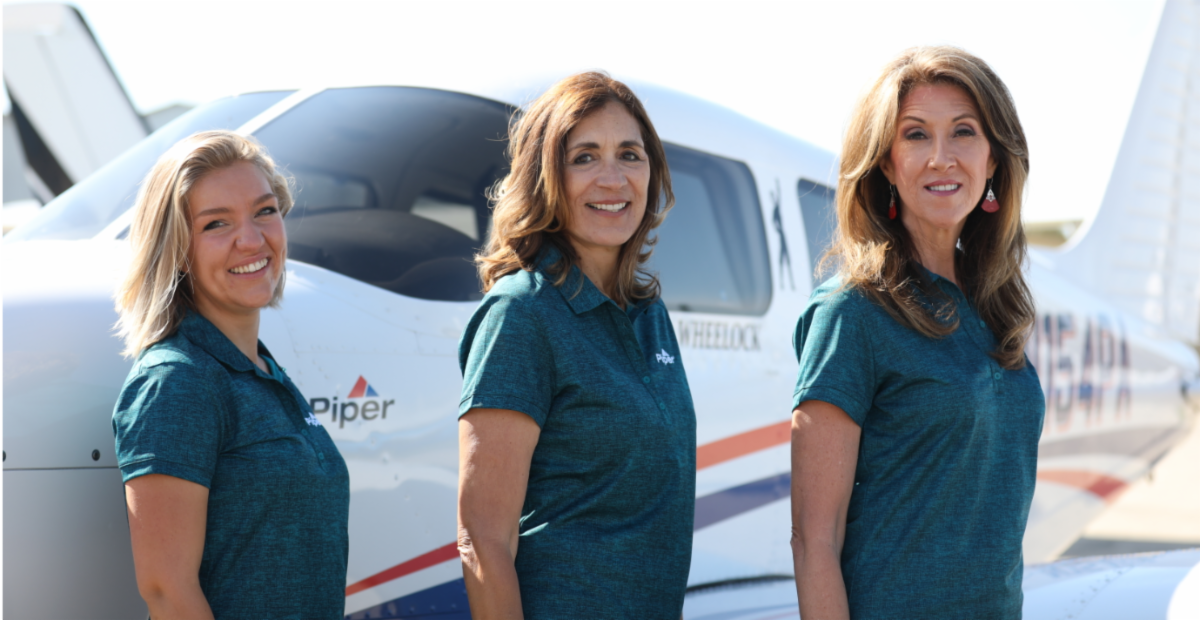 About Tammie Jo Shults
Tammie Jo Shults possessed an early interest in flying, but she faced various obstacles on her path to becoming a military pilot. Applying her lifelong trait of perseverance, she eventually became one of the first female F/A-18 Hornet pilots in the United States Navy.

After concluding her Navy career, she became a pilot for Southwest Airlines. Tammie Jo’s incredible history and talent received wide acclaim on April 17, 2018, when she successfully landed a Southwest Boeing 737 after an engine exploded at high altitude, causing multiple system failures and a rapid depressurization. The successful landing of Flight 1380 in Philadelphia saved 148 total lives including passengers and crew, as detailed in her captivating novel, “Nerves of Steel”.

Tammie Jo and her husband Dean live in Texas, and Dean also enjoys flying for Southwest Airlines. The couple has two adult children and are committed to living out their faith and serving in their community. They are active in their church and volunteer at a school focusing on at-risk youth. While Captain Shults retired from commercial flying in September 2020, she continues to dedicate herself to volunteer piloting and serving on the board, alongside Dean, of Angel Flight South Central.

About Olga E. Custodio
Olga E. Custodio is a Retired Captain from American Airlines with over 11,000 hours of flight time and has flown the Boeing 727, Fokker 100, Boeing 757 and Boeing 767 to the Caribbean, Central America, South America, Europe, Mexico, Canada, and the U.S. Her education includes a Bachelor of Arts degree from the University of Puerto Rico. She is a graduate from the Masters Leadership Program, MLP, in San Antonio.

Olga is also a Retired Lt Colonel from the United States Air Force (USAF) Reserves with 24 years of service. She received her commission through Officer Training School in 1980. She was among the first females and the first Hispanic to graduate from USAF Undergraduate Pilot Training (UPT.) Graduating in the top 5%, she received her fighter pilot qualification and became the first female

With a passionate love in what she does best, combined with a great mix of skills and over 40 years of military, commercial professional and aviation advocate career, Lt. Col Olga E. Custodio is a great role model. As the first Latina military pilot and American Airlines pilot, she ideally represents diversity and inclusion.

About Elise Wheelock
Elise Wheelock is a Fleet Sales Representative for Piper Aircraft. In her time at Piper, Elise has logged landings in 43 states and 2 countries. She spent the past few months presenting the Pilot 100i to flight schools throughout the United States. Elise is qualified to fly all models that Piper currently produces, and is the youngest pilot to have completed factory training for the M600. Elise holds a Commercial Pilot’s License for single and multi-engine aircraft, and is also a Certified Flight Instructor – Airplane, Instrument Airplane, and Multi Engine. Today, Elise has logged nearly 2000 hours of flight experience.

Growing up, Elise received a free discovery flight from the Ninety-Nines as a high schooler and quickly fell in love with flying. She then earned her private pilot’s license in airplanes and gliders at her local airport in Virginia. Following high school, Elise attended the University of North Dakota, where she studied Commercial Aviation and competed with the UND Aerobatic team, taking first place in the primary category at Nationals in 2017. It is particularly meaningful to Elise to participate in the Air Race, given the role that the Ninety-Nines played in helping launch her aviation career through their mentorship and scholarship. As a student pilot, Elise volunteered at one of the stops on the Air Race Classic and has been desperate to race ever since.

About Piper Aircraft
Piper Aircraft Inc., headquartered in Vero Beach, Fla., offers aviators throughout the world efficient and reliable single and twin-engine aircraft and is the first general aviation aircraft manufacturer in the world to certify Garmin Autoland. The single-engine M-Class series – the M600SLS, M500, and M350 – offers businesses and individual’s exceptional performance, value and a superior ownership experience. The Personal Class Seneca V, Archer LX and Archer DLX balance proven performance, efficiency, and simplicity in a piston-powered aircraft. The Trainer Class Pilot 100i, Archer TX, Archer DX, Arrow, Seminole and Seneca V aircraft form the most complete technically advanced line of pilot training aircraft in the world. Piper is a member of the General Aviation Manufacturers Association. To learn more about Piper Aircraft, visit the company’s website at www.piper.com